What is a mobile laser tag Tournament?

It's a double elimination competitive shoot out afternoon with friends, family and neighbors. We have selected 6 tournaments to be held between San Antonio and Boerne.

Tournament rules: DOUBLE elimination guarantees every team a minimum of 2 battles. After the 2nd loss the team is "knocked out". 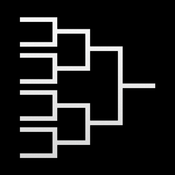 Code of conduct: absolutely no cursing, fighting or cheating. Offending team will immediately forfeit participation in the tournament without refunds and a possibility of being banned from future events.

Battle rules: DOMINATION, the winner of each battle is determined by the color of the flag (box) at the end of the round. The goal is to capture (tag) and hold the flag keeping the opponents away.

Participants: minimum age is 9, must have a legal guardian's written approval and signed waiver.

Teams: each team can use only 5  member squad per battle. Players are NOT allowed to switch or play for multiple teams. Violating teams will forfeit their next battle.

Unique abilities: each 5 member team will have the following roles, weapons and abilities:

Each specialist' ability is activated with a silver button on the weapon.

Equipment: special edition laser tagger sighted for 40 yards, military grade RED DOT scope and a Bluetooth paired sensor headset (each tagger and headset are paired, so choose your roles ahead of time).

Locations: each location is unique in its nature and we all want to respect their hospitality and rules.

What to expect the day of the Tournament?

Show up early to attend orientation and ask questions 30 minutes before the first round of battles start. 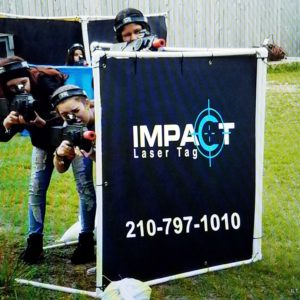 Bring chairs, bug spray and sunscreen. We will coordinate with our hosts to have food trucks and water available for purchase.

Each team will receive their unique tournament package with team score card to keep track of wins/loses as well as tournament bracket and wrist bands for the registered team members marking them as eligible to play. Each person has to sign a waiver before the tournament NO EXCEPTIONS.

The tournament will have two designated battlefields. Pay close attention to your schedule and battlefield. If the team is 2-min late, it will forfeit it's battle.

Sponsorship and advertising opportunities are available. Contact us directly at 210-797-1010 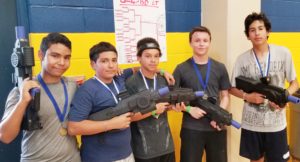 (3)  Invite 4 of your friends to join your team

(4)  Show up the day of the tournament, dominate the competition, and brag to all your friends!